After the new job that started back in '96, the priorities shifted again. I was still racing sailboats, but the new job reinvigorated my career. I was at Epson to help start their big push into the projector business. We built a great team, grew the business to $100M with zero personnel turnover (something I'm very proud of) and became the #2 brand in the US. So working on the Mustang took a back seat.

I decided to get started again slowly by refreshing the interior. This was a pretty easy project as everything (EVERYTHING) is available in pretty good reproduction. Except the arm rests, but I'm getting ahead of the narrative. So off to buy new carpet, front seat upholstery (the back seat that I first sat on in 1967 was still in near perfect condition), door panels and dash plastic.

I took the seats and new covers to West Coast Motoring in Dana Point. I had met the owner at Taco Surf across the street (where we spend almost every Friday evening) and had visited the shop, watching as he recarpeted a Ferrari boot and inspecting a '69 Mustang upgraded to stock looking leather interior. I wanted mine original, and he told me that the best way to do it would be to use the TMI kit, as it would match better than any he could otherwise get, and he'd install it for me. So I brought the kit and new foam for WCM to install.

Back to the garage, where I stripped the interior. I was hoping to find the build sheet under the carpet, but so such luck. I did find some miscellaneous fasteners, a doorjamb domelight switch, and a defect tag for scratched glass.

Nothing was too bad in the interior, just worn. A few splits in the driver's seat, but even that was good for a 38 year-old seat. But back to those arm rests. These are made by applying vinyl to a mold, filling it with foam, putting the frame into the still liquid foam, and curing it. I don't know how they make the reproductions, but it's surely not the same. I had bought these from California Mustang (I hadn't yet found Mustangs & American Classics in Mission Viejo), and these were returned for refund. West Coast Motoring sealed the cracks inside the pulls with color-matched goop, and they were better than the repros.

The biggest job was the door mechanical disassembly. I wanted all new weatherstripping and window channels, so that meant the windows and wing-window structure all needed removal.

While the door was apart, I repainted the door interior panel in the stock red, with paint I bought at Mustangs & American Classics - yeah, I'd found them - so when that was dried for a couple of days, reassembly began.

The dash panel replacement was straight forward, but the panels needed some hand work first. The masking of the matte black paint over the chrome finish was nowhere near as precise as OEM. Lots of time with an x-acto blade removing the paint from where it shouldn't be, and a tiny brush and Testor's Flat Black adding it when it was missing. The original gauge surrounds were painted on the back in flat white to help diffuse the gauge lights, so this needed to be added. I found later that the high-beam indicator lens was blue, but the light overwhelmed the tint and it looked white, so I darkened the tint with blue paint. A little Meguiars plastic polish on the clear sections, and it's concourse quality.

Yup - that's 170,432 miles. The only thing that's not "period correct" is the dash cover, but that's held in place only by the shape of the dash. The steering wheel wrap i installed in 1977 (I did a crappy job, but it's a reminder of my skills at 18 years old, and I can remove it anytime I decide. The floor mats are identical to the ones dad bought in '67, but I don't recall if they were bought at the dealer. My memory says 'no', but I bought these as reproductions of Ford mats.

I was really looking forward to dad coming to visit to see the work on the way from Washington to Arizona in 2005. I'll simply write that his 85 year-old heart had other ideas, which forced him to travel directly to Tucson. He never made it out, and after saying our final goodbyes two days after Thanksgiving, 2005, the Mustang project was shelved for a while. It was his car, after all...
Posted by Mark the Motorhead at 11:08 AM No comments:

It was a fun purchase, actually. This was before everyone had the internet, Edmunds.com had begun publishing invoice prices, so when the quoted price was something like $3K above invoice, I told them that I knew the invoice price and what they were going to get in credits from Ford, and what I was willing to pay in dealer profit.

So I rolled off in a white '96 Explorer. Yes, an SUV. But this is what I call a power tool. It was very useful to haul sailing gear and my crew, later my bicycles. And it was my first tow vehicle when I started cart racing. I think I had 180,000 miles on it when I traded it in for a new one just like it. It was a great power tool that had worn well and fit my hands. It would take a while for the new one to fit me as well.
Posted by Mark the Motorhead at 9:36 AM No comments:

That started the first freshening of the Mustang. I didn't want to pop for a new car, deciding instead to make the Mustang worthy of a daily driver again. Rebuilt suspension (ball joints and bushings) and brakes (original drums all around, of course), new Goodyear tires, and a rebuild of the old Autolite carb to correct all the hardened seals and gaskets (thanks, Jet Performance in Huntington Beach!) was all it really needed.

And it was on the road again for the next two years!

Posted by Mark the Motorhead at 8:24 AM No comments:

As SEMA so graciously titled me an "Opinion Leader" in their Enthusiasts Network, I was asked to tweet and blog about what I saw. Their primary goal was to push #SEMA into a trending topic on Twitter to get more attention in social media than would have otherwise been the case. In exchange for access to the show, I was more than happy to do my part. They didn't say that all my comments should be positive, after all.

At every SEMA show, there is one car that is on display to show off the vendors installed product more than any other. Previous car models that energized the industry were the Mini Cooper in its first year, and more recently the Ford Mustang and Dodge Challenger. This year seemed to be all Chevrolet Camaro, all the time. To the point that I began to joke to my friends: oh, look - a customized Camaro!

The Detroit News posted pictures of 48 SEMA Camaros in their gallery:

I suppose I understand why all the brands flock to the latest exciting car. But that is tempered by the notion that the impact of the display is diluted when the Camaro in your booth is the fifteenth custom Camaro presented to the show attendee. Maybe that's why I remember the WD-40 Camaro and Hurst Camaro, both on display in the lobby, and the Edelbrock Camaro in the second row of booths, but I am hard pressed to recall any of the dozens of additional Camaros peppered across the show floor.

How about a Nissan GT-R, like Hankook and BASF did, or Cadillac XLR or CTS. Bilstein had two amazing cars. An off road racer tribute to the Olympia Beer sponsored Bronco of the '70s, and an old Ford sedan styled to look like a Duesenberg! How about a 60's classic? Or a Ring Brothers custom.

As I finish writing this, I've realised why the Camaro was everywhere at SEMA this year. It was the most recent exciting car that's accessible to the mass audience. Customers coming to SEMA need to be looking for products that excite their customers, and you might not find those products hanging on a Lamborghini.

And there was one display car based on the new Camaro that I really liked. But that was because it looked like a Firebird Trans Am. If only the brand would have survived...

Posted by Mark the Motorhead at 7:41 AM No comments:

What a great week at SEMA. I was invited by the show as an "Opinion Leader". That gave me some amusing credibility with the exhibitors I met with. :) I'll start writing about what I saw that I liked - and didn't.

Forty two years next month. December, 1967. My dad had been transferred from his job as a chemist at the Richfield oil refinery in Carson, CA to become the head quality control chemist at the ARCO distribution terminal in Portland Oregon. He had given away his 1952 Lincoln Capri to a family friend - he was halfway through the rebuild when we got the transfer - so he needed a car for his morning commute. The choice? A white '67 Mustang hardtop.

The whole family went to Harlan Griffith Ford in Portland to pick the car up. I always thought that this indicated how big a deal it was to be getting a new car, and it was a big deal. I'd only known the '52 Lincoln and the station wagon we got when my younger brothers were born, a '63 Buick Invicta. A new car was indeed a big deal, and a Mustang made it even better. Looking back on it, there was a more practical reason for us all to go - Dad needed another driver to drop him off at Harlan Griffith, and where mom and dad went, so went the kids.

He bought the Mustang off the lot. Oddly optioned car, but it was a white hardtop with an automatic. 289 4V, heavy duty suspension, wire wheel covers. That's a complete option list, except for one thing I almost never see on a base Mustang - a factory in-dash tach. No power options. No power brakes, or steering, no air conditioning (it was Portland after all).

But here's the coolest part of that day: I still remember riding home in the back seat of that Mustang, and waving to my brother in the Buick as dad took the wrong exit off Highway 26. Ten years later, I bought the Mustang for $1000 - about what it was worth then - and twenty five years after that, I started to rebuild it.

Driving the Cobra up Pacific Island

http://www.youtube.com/watch?v=ww6ZVWDkvFM
Posted by Mark the Motorhead at 8:53 PM No comments: 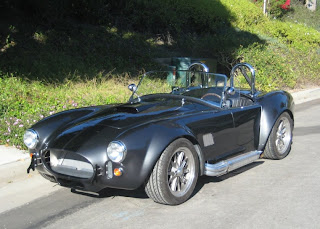 I've been chosen as a member of the SEMA Enthusiast Network to attend the big show. Woot!
Posted by Mark the Motorhead at 7:31 PM No comments: